Nominations for the 2019 Ripple of Hope Awards are now closed. Thank you to all who submitted nominations!

In 2005, The Network established the Ripple of Hope Awards to recognize the most outstanding among us–employees, Mentors and other independent contractors of The MENTOR Network whose passion, energy and skill have created a positive impact in the lives of others. Whether they work in direct care, operations or supporting business roles, these outstanding employees and service providers create a “ripple of hope,” and a legacy of compassion and caring for others to follow.

The award’s name echoes words spoken by the late United States Senator Robert F. Kennedy in his 1966 address at the University of Cape Town in South Africa, during the height of Apartheid:

“Each time a man stands up for an ideal, or acts to improve the lot of others, or strikes out against injustice, he sends forth a tiny ripple of hope, and crossing each other from a million different centers of energy and daring those ripples build a current which can sweep down the mightiest walls of oppression and resistance.”

How do I nominate someone?

Anyone can submit a nomination! Nominees are welcome (and encouraged!) from all of The MENTOR Network’s programs. Click on the nomination form below, and include plenty of detail! The most compelling nominations include specific examples that show why the nominee is deserving of this special award.

*These are actual nominations. Names have been changed to respect the individuals’ privacy.

What do winners receive?

Winners will be invited as honored guests of The MENTOR Network to a special ceremony to be held in Boston, Massachusetts on November 5, 2019. Travel and 2 nights’ accommodation for each winner and their guest will be arranged and paid for by The MENTOR Network.

Thank you to those of you who have taken the time to submit nominations in past years. Without you, we would not have been able to recognize the outstanding Ripple of Hope Award winners of the last 14 years.

All employees and all current individual independent contractors (including, but not limited to, Mentor foster parents and Host Home providers) from all of The MENTOR Network’s programs are eligible. Nominations received from individuals who are related to a nominee by birth or marriage or the nominee’s significant other will not be considered. All nominations will be reviewed by the selection committee and announced in September. Award recipient must be a current employee in good standing (or a current independent contractor in the case of Mentors and Host Home providers) at the time of the awards ceremony. 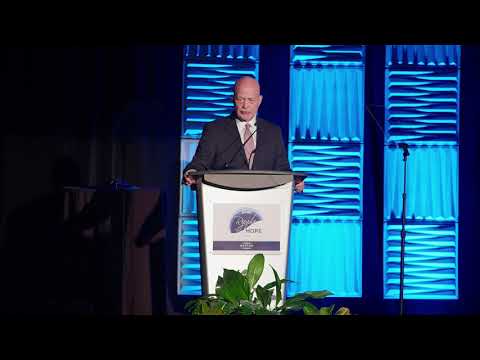 Bruce Nardella, President and CEO of The MENTOR Network, speaks at the 2018 Ripple of Hope Awards.